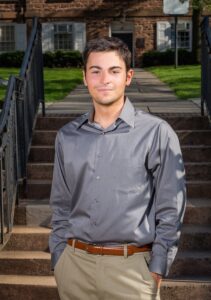 Steven earned his undergraduate degree at Rutgers University, where he was introduced to bacteriophage in the Duffy Lab. He joined the Burch lab as a Ph.D. student in the EEOB program. In general, he is interested in studying viral evolution from an ecological approach. He is interested in viral host range and adaptations conducting wet lab research utilizing bacteriophage on Ecoli hosts. Fun Fact: ” I am scuba certified and my dream dive is off the coast of Greece.” 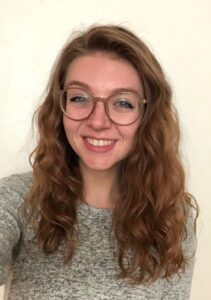 Addie is a Ph.D. student in the Genetics and Molecular Biology program, co-mentored by the Burch and Goldstein Labs. Her research seeks to understand the cellular causes and evolutionary consequences of different types of asexual vs sexual reproduction. She uses computational modeling of evolving gene regulatory networks in the Burch Lab to explore this topic. Fun Fact: “I hiked over 100 miles the summer before starting grad school.” 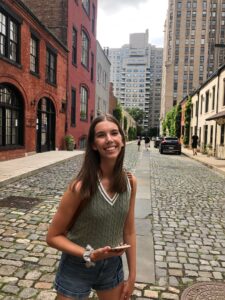 Blair is a junior majoring in biology with a minor in environmental science. She recently discovered her passion for computational applications of biology. The Burch lab has allowed her to explore evolutionary questions through the development and use of biologically relevant computational models. She plans to go to graduate school for biology, though she is still determining which area she wants to concentrate in. Fun fact: “I am from the beach but I have never been on a surfboard!” 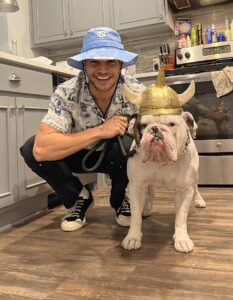 George is an undergraduate student studying Quantitative Biology in his 4th year here at UNC. He was a member of the SEA-PHAGES program at Lehigh University from 2019-2021 before transferring to UNC and joining the Burch Lab in the Fall of 2021. He has a passion for bacteriophage research and his interests are in quantitative and computational biology. Fun Fact: “When I was in Kindergarten my dream job was to be a Geneticist.” 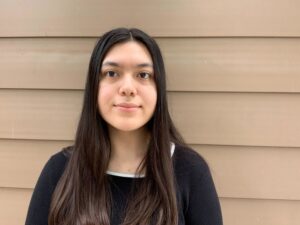 Karla is a senior majoring in Biology with a minor in Art History at UNC. She is interested in pursuing a master’s in Public Health with a focus on epidemiology. Being part of the Burch Lab has allowed her to explore her interests in Viral Evolution and has strengthened her desire to pursue a career in studying the effects of Viral infections in human populations. Fun Fact: “I like to read books during my free time and I am currently learning how to knit.” 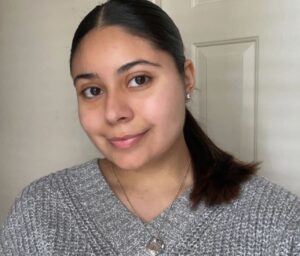 Jessica is a fourth-year student majoring in Biology with a passion for both the healthcare and research field. Jessica joined the Burch lab in August 2021 to gain first-hand experience in a lab and to explore her passion. She is deciding between the healthcare field, research, or doing both in the future. Fun Fact: ” I am a certified EMT looking at working in the Triangle Area.” Kayla earned her undergraduate degree at the University of Arizona. In general, she is interested in combining computational and experimental laboratory components to look into the evolution of robustness and evolvability in viruses. After helping to develop a program that determines the evolution rate of influenza based on within-host dynamics in collaboration with Dr. Mark Tanaka, she is currently taking a break from coding to explore the biochemical determinants and evolutionary mechanisms of MERS-Coronavirus host range expansion with Drs. Mark Heise and Ralph Baric.

She served as the 2012-14 President of the Biology Graduate Student Association and is the 2014-15 GPSF IT Policy Chair.

Alexander earned his undergraduate degree at the University of Virginia. He is primarily a computational biologist generally interested in the modelling of complex systems and artificial life. In his research, he simulates evolution of artificial gene networks to study the origin and maintenance of sexual reproduction. Code used in his simulations is available here.

Alexander is an instructor with Software Carpentry (since 2013), was a module leader for the Reed Bioinformatics & Genomics Workshop (2015), and served on the Advisory Council of Training Initiatives in Biomedical and Biological Sciences (since 2011). Lisa completed her undergraduate degree at Rutgers University and went on to receive her Masters at Ohio University. As a PhD student, she was generally interested in the origins and maintenance of diversity. More specifically, she is interested in how inter- and intraspecific interactions can play a role in phenotypic diversification. Her thesis focused on examining how competition for resources can drive novel resource use by taking an experimental evolution approach in the phi 6 bacteriophage system. Novel resource use is particularly relevant in viruses as it relates to host range expansion. She followed with a postdoctoral position with Paul Turner at Yale University. Artur completed his undergraduate degree in Biology at The College of New Jersey and completed his PhD at the University of North Carolina – Chapel Hill. Studying under both Dr. Christina Burch and Dr. Corbin Jones, Artur is primarily interested in microbial genetics, evolution of microbial genomes and the assembly of genetic networks. Currently, he is investigating genetic network assembly in bacterial plant pathogen Pseudomonas syringae. Katie Gensel completed a B.S. in Zoology and a B.A. in Spanish Language and Literature at NC State University, with a minor in Microbiology. She then completed a year of graduate coursework/research at Cornell University in Food Microbiology, after which she decided to take time off from school and explore more career options. She has now spent two years as a research technician working on various experiments in the Burch lab, primarily the propagation of phi 6 lineages under various ecological conditions to explore the evolution of novel host use. She is also responsible for training new members of the lab in general lab practice and techniques, as well as management of laboratory cultures, chores, and inventory. Her general “science interests” lie in the realms of ecology, evolution, microbiology, and most especially the intersection of all of the above. Her past research experiences range from fieldwork exploring reproductive endocrinology and parental behavior in sparrows, to bench-work modeling Norovirus viability and persistence using a murine surrogate system… but she can’t really make up her mind about what she wants to do with it all yet. Sarah joined us from the University of Texas where she worked with Mark Kirkpatrick, using evolution experiments to examine the effects of mutations in haploid and diploid yeast. She is currently an NIH NRSA Postdoctoral Fellow investigating the causes and consequences of superinfection in the bacteriophage Φ6. Marty hopes to apply the evolutionary toolkit he developed in graduate school to the study of emerging viral disease. Marty’s graduate research investigated the genetic basis of host range evolution in an RNA bacteriophage. He has moved on to a postdoc in the UNC medical school with Mark Heise. There he will be investigating natural variation among alphaviruses, mosquito borne RNA viruses that are a significant cause of encephalitis and infectious arthritis in humans. Kristen graduated from the University of Utah with a B.S. in communication and a minor in chemistry. During her time there, she worked in the lab of Bob Weiss and helped sequence the genome of Pyrococcus furiosus. Kristen is a participant in UNC’s Bioinformatics and Computational Biology Program. Her research interests include computational studies of gene networks, robustness and HIV evolution. Siobain is interested in emerging RNA viruses, and using evolutionary ecology to inform public health. As a graduate student, Siobain used evolution experiments to study the adaptation of an RNA bacteriophage to novel host environments. Siobain followed as a postdoctoral fellow at the Center for Infectious Disease Dynamics at Penn State, working with Eddie Holmes. She now has her own research group at Rutgers University. Michael Kelly is a junior undergraduate biology major at the University of North Carolina at Chapel Hill. He is currently working on viral evolution and comparative evolution using both lab techniques and computational methods. He is currently learning how to work in Python environments based around bioinformatics. He hopes to attend graduate school after undergrad with the goal of earning a PhD. Elizabeth is a Biology and French double major who is undecided about her plans after graduation but hopes that by continuing to do undergraduate research, she will be able to choose a field to pursue. She does hope to pursue the study of genetics in some way. She began in Burch Lab last summer and is now working with Lisa Bono on the experimental evolution of viruses under different selective pressures. Kedar is a junior Biology and Anthropology major working in both the Burch and Corbin Jones Labs. He has been interested in Biology from a very young age and has been working in Burch lab for about a year and a half. This semester he will be doing Undergraduate Research with Artur Romanchuck on gene networks in Dr. Jones’ lab. He plans on continuing undergraduate research through the rest of the year and then writing an undergraduate honors thesis with hopes of going to graduate school for Public Health. He’s also really awesome at golf! Jacob is working towards his bachelors degree in Biology and hopes to go to graduate school to study Zoology or Wildlife Biology. He is also a member of the UNC BEST Program (Baccalaureate Education in Science & Teaching) and wants to eventually teach high school science. Currently Jacob is working on a project that looks at the evolution of biodiversity using bacteria. Yingjie is double majoring in Life Sciences (with a Biomedical Sciences specialization) and Linguistics at the National University of Singapore on summer lab exchange with UNC Chapel Hill in the Burch lab. He is also concurrently pursuing a double degree with Waseda University in Japan in the liberal arts. With a rather eclectic combination of academic majors, he is primarily interested in the applications of evolution within both virology and linguistics. Once he finishes studies (somewhere in 2016), he plans to pursue a Masters in virology before heading to teacher training in Singapore. Don’t get him started on how amazing biology is, his (ex-)students will testify that he can go on for hours at a time! Katie Overbey worked in the Burch lab during her sophomore year and is currently pursuing a Bachelor’s degree in Environmental Science with a concentration in Public Health. She worked with Katie Gensel on an experiment examining gene flow via reassortment rates. Katie is a senior Biology and Environmental Studies major at UNC. She began working with the bacteriophage G4 (and Jen Knies) in the summer of 2005 on two projects: 1) examining the genetics of adaptation to different thermal environments and 2) investigating whether adaptive mutations identified in lab experiments also underlie variation in performance in natural phage populations. To better understand the genetics of adaptation to different thermal regimes, Katie helped adapt three G4 populations to two constant thermal regimes and one fluctuating thermal regime. For the second project, Katie has been measuring the performance of wild G4-like phage across a range of temperatures to determine if mutations adaptive to high temperature in the lab also underlie variation in thermal performance in natural populations.